Witham Beer Festival began in 2011 as the brainchild of a few club members. The idea was to help raise some funds to fund repairs to our pavilion building so as to avoid passing the costs on to members. In that first year there were a few barrels of beer under a number of borrowed gazebos that fell foul to Tropical Storm Irene.

In 2012, undeterred by the weather the previous year larger tents were borrowed from various local groups. Expenses grew and profit dropped so a rethink was required.

In 2013 a marquee was introduced for the first time and attendance improved but everyone was still trudging across the cricket field to the toilets in Saul’s Bridge.

It was in 2014 that a larger 80ft marquee and Mobile Thrones were first introduced and momentum began to build but we still struggled to find sponsors for the 30 beers and few ciders that were on offer. The committee also made a decision to be bolder in future, having run out of beer early on the Saturday for the last 2 years. 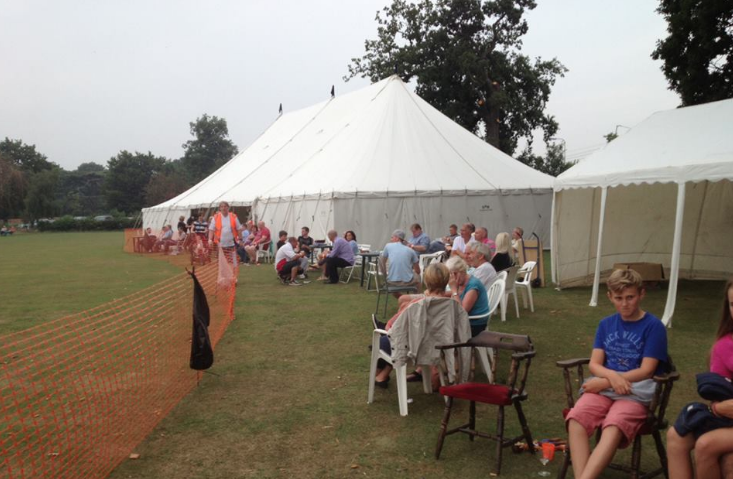 So in 2015 the game changed and 80 beers & ciders were ordered along with some local wines. A stage was introduced for the entertainment acts and uniforms to help people identify volunteers as well as outside caterers in the form of Nonna’s Pizza & Grill. 2015 was a great success with around 1500 visitors but there was still not enough beer as we ran out by 8pm on the Saturday.

2016 proved to be the biggest and best ever. We had a 120ft marquee, over 100 beers and ciders and a larger range of wines. The attendance was superb, as was the support from local businesses and also volunteers from outside the two sports clubs who helped out.

We are featured on https://www.eatdrinkseek.co.uk/beer-festivals/ the biggest food festival site in the UK.